Whether you’ve just relocated because of your job or really like that everything is bigger in Texas, it’s time to learn where the top 10 places to live are in the state. You’re going to learn a lot about each of these cities, giving you more information to make the right choice.

As Texas’s capital city, it’s no wonder that this is the top spot to live in within the state. It ranks third on Texas’ overall ‘Best Places to Live’ list. Austin has recently emerged as a top tech hub within the United States, but it’s more affordable for major companies that don’t want to be in Silicon Valley and those who are starting new tech companies. The area’s growth rate has somewhat increased the cost of living, making it fall from the top spot on the list of best places to live for the last three years. Still, the residents here spend right over 23 percent of their household income on various living expenses.

Dallas-Fort Worth has a few more people living there than Houston, and this is also helped by the strong job market, higher salary averages, and the lower cost of living. Since the median cost is higher, homebuyers should expect to pay more than any other Texas city. This area ranks 32 on the best places to live for desirability compared to 150 metro areas. Most people act on the number situation and move to the Dallas-Fort Worth area. This is shown in the population increase to 4.84 percent in recent years.

Houston is the second-largest metropolitan area in Texas, and it ranks number 27 on the list of best places to live. This is all thanks to the net migration causing rapid growth to the population, a flourishing job market, and a low living cost. Houston’s residents also make more money than people in other areas, as you can see from the average salary. Typically, Houston residents spend about 22.8 percent of their household income on their housing expenses.

San Antonio was founded in 1718 and is the fourth on the top list of places to live within Texas. People flock here because it’s got a decent job market and a low cost of living. The population of San Antonio grew by 5.34 percent between 2014 and 2018. The unemployment rate was well below the country’s national average, even though the average salary is below the country’s national average.

Killeen is the home of the US Army military base at Fort Hood. It’s quite affordable as far as metro areas go. Residents tend to spend 22.75 percent of their household income on their living expenses. Between 2014 and 2018, Killeen about broke even when compared to people moving in and out. However, according to the Census Bureau, the population decreased by about 0.07 percent during the time.

Corpus Christi is home to a large shipping port in the nation, so, naturally, it’s seen some slight population growth because of net migration. Corpus Christi residents don’t have to commute very far to work, as most people spend 20.2 minutes getting from home to work. Therefore, it has the sixth shortest commute of the 150 most popular metro areas within the US. In fact, it’s only tied with Eugene and Brownsville, Oregon.

Beaumont is close to Louisiana, and it’s the 124th spot in the best places to live list. The residents here have a higher annual salary average than Brownsville and McAllen; plus, there’s a lower cost of living. Most people spend 22 percent of their income on rent, mortgage payments, and property taxes. Its population remains fairly the same for the last four years and only saw an increase of 0.14 percent.

El Paso sits on Texas’s western edge, and it ranks 17 out of 150 populous metro areas within the United States. This is through the Well-Being Index and Gallup National Health, which primarily focuses on hometown, economic stability, and physical health. Despite all that, there is a declining population number because of low annual salary averages. Therefore, it actually sits at 130 on the list of best places to live. The population is the fifth-fastest to decline out of the 150 listings.

While McAllen doesn’t sit on the beach, its location is on Texas’s southern border, and it sits very close to Mexico. Therefore, it’s a popular spot for retirees who want to stay in the warmth rather than the cold in winter. However, McAllen does struggle with a declining population and high unemployment rates. Even so, most residents find that it’s slightly more preferable to live here than in Brownsville.

Average Salary (Annual): $35,230Brownsville sits at the Texas border’s southernmost tip, touching the Gulf of Mexico. Therefore, many vacationers like to go there to enjoy South Padre Island beaches. However, it’s not the most preferred place to live in, and its population is declining. This is primarily because the average annual salary is much lower than the country’s national average. You’re going to find Brownsville at the 138th spot out of 150 on the list of best places to live within the United States.

Read our flawless reviews on Google

churcher msg

@Google
Read More
I used the company for the first time and had a great experience. The two employees were on time and did great work at a reasonable price. They worked efficiently while still being careful not to damage any of the property or walls. They were friendly, professional, and helpful. I would highly recommend and would definitely use them again!

Andrew Holmes

@Google
Read More
The Great Heights Relocation are amazing. They were all super professional, punctual, friendly, affordable, and deeply committed to helping the community out. I am so happy that this company exists. They are a real gem. I would not use another mover ever again. They are the best.

Robert Victoria

@Google
Read More
I am so glad that Great Heights Relocation came to my rescue when I needed them I am so happy that this particular moving company tried against all odds to ensure that I was given an honorable moving. Those are the kind of services that I feel so great when I talk about. I am so full of praise for them. Way to go, keep it up guys. I would love to recommend your company to everyone.

Grace Ragin

@Google
Read More
I had booked an Great Heights Relocation for my move. They were so nice to make accommodations for me in urgency. I really thought I was going to be stuck having to pay additional rent to the place where I was previously staying for a few more days but they managed everything for me and I love them for that. Highly recommended.

Ethan Brown

@Google
Read More
Moving can be stressful, but working with Great Heights Relocation was a GREAT experience. They are very professional, handled all my items with care and were the most dependable moving company I've ever worked with. They did such a great job, I used them again recently to move a few smaller items. Highly recommend!

Jeffery Shirley

@Google
Read More
Excellent job. Very quick, careful, nice and respectful. The three gentleman that moved us were very polite and worked hard. They took extra care not to damage any of our belongings. This was the second time I've used them and would highly recommend them.

Andrew Cunningham

@Google
Read More
My move from Houston to Manhattan went well. Considering the winter weather, there were no delays with the pickup or delivery of my things. The cost was fair for such a long-distance move. There were no cost over-runs vs. the initial estimate. I highly recommend their services.

Christopher Quinn

@Google
Read More
I needed to move from Manhattan to Houston last month to start a new job. I didn’t have a lot of things since I lived in an studio apartment, but they are in left and to me. Great care was taken when the moving team packed and shipped my things. There were no delays in pickup or delivery. The cost was also quite good. Recommend.

Michael Jeppesen

@Google
Read More
The company is highly recommended. The workers are very professional. They make sure that they support you with everything relevant to your move after you booked them. I'd like to thank them for such a wonderful experience and suggest it to anyone out there.

Great Heights Relocation is a family-owned and operated moving company that provides best-in-class moving services. We offer competitive pricing on quality moving and storage services. We have been a rated A+ and BBB member since 2012, and we’re a member of the Southwest Movers Association, the Federal Motor Carrier Safety Association, and the American Moving and Storage Association. No matter what distance you need to move or how small or large the job is, we’re here to help you. We can answer any questions that you may have. Moving can be stressful, but we can help you put your mind at ease. 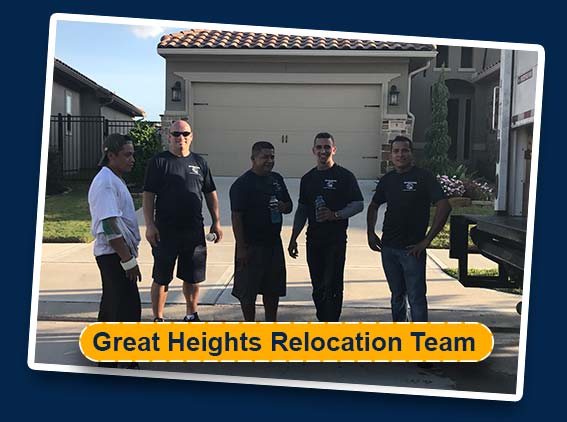